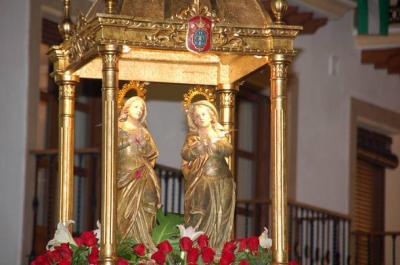 When Spring comes many towns and cities celebrate festivities which take place out, in the streets and in the countryside. That is the case of two towns in the High Plateau of Granada, in El Altiplano de Granada. They are Huéscar and La Puebla de Don Fadrique, which share their Saint Patrons, "Alodia" and "Nunilon".

The legend tells that the two sisters were the daughters of a Muslim father and a Christian mother and they died because they converted to Catholicism. Their chapel is located at the foot of La Sagra, 2383 metres high, in the border between the two towns. Many people go there to celebrate the fact that they converted to Catholicism and both towns celebrate it with processions, sport competitions, music and dancing and with a picnic in the countriside as well.

The visitor will be surprised by a festivity full of joy which invites you to be out in the streets celebrating and in the countriside enjoying the good weather.